skip to main | skip to sidebar

Wednesday Before The Derby

We planned to attend The Great Steamboat Race late in the day but Deb thought it would be fun to catch a few races on the way to the river. She is hunting for the gold commemorative stamp that is being issued by the track’s post office. I didn’t know the track had a post office but it is a big place so maybe I have missed it all these years. She saw it on the news and thought it would be a hoot.

We arrived late, just in time for the 6th race and the track’s parking lot was closed because it was full. So we parked in a the front yard of a close friend, Bob or Tom or something like that, he only charged us $10 because it was so late. 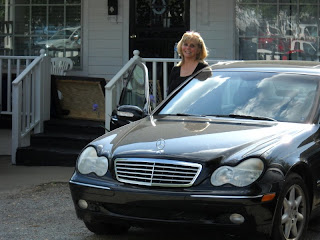 We entered by gate 10 and headed straight for the paddock area. Checked out the horses, placed our bets and then joined a few thousand of our friends that would soon be screaming their heads off. Why aren’t these people at work? No wonder you can not get anything done in town this week. 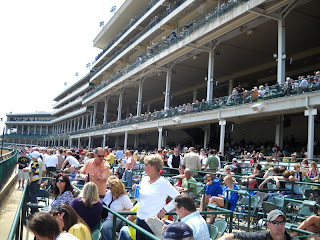 Busted!! Sorry boss, we are not in the office. This is Amber, she is in the office right across the hall from mine. Oddly, neither of us knew the other was headed to the track, but what the heck? It was such a pretty day. 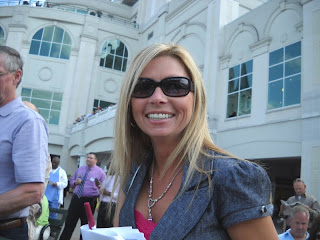 HAHAHA, another one!  Right after Amber walked away, I turned around and caught my favorite real estate appraiser Glenda in her pre-Derby attire. 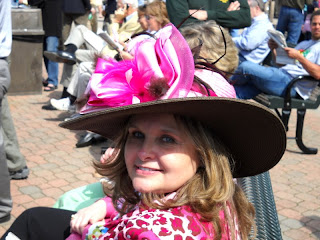 It really was a beautiful day.  Here we are track side, the stage right over deb's shoulder is where the guy stands when he plays My Old Kentucky Home on Derby Day.  It is also the board that tells how much money you have just lost. 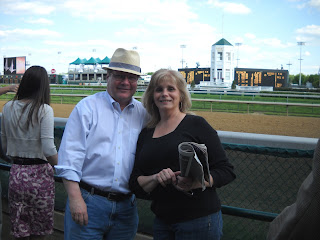 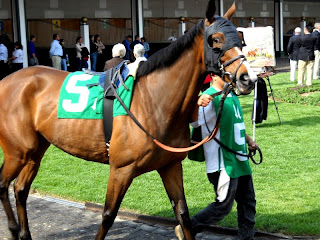 See it Framed
This one seemed to like his picture being taken. 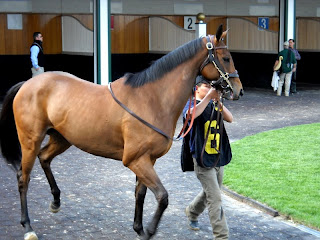 See it Framed
You do not see white ones very often. 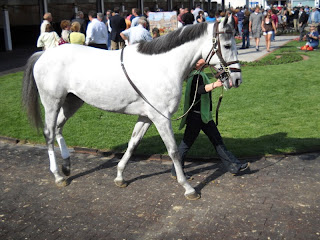 See it Framed
Deb and I hit the same exacta in the 9th race and left with more more money than we came with! We skipped the steam boat race and went to dinner instead.  After that we stopped in to check out the new Fresh Produce Warehouse in Hikes Point.  I took in my camera hoping to catch a few interesting painting subjects. We met Jerald, the store manager, he offered to help me after I snapped a few shots. I guess it isn’t everyday someone takes pictures of his produce! After I explained why he was very helpful and pointed out some interesting shots. They carry many items you can’t find at the grocery. 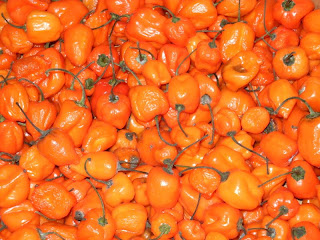 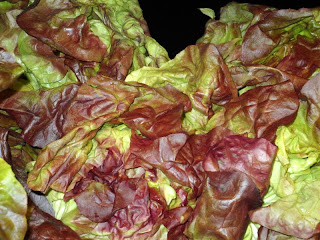 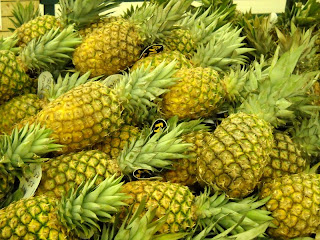 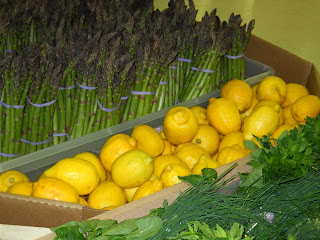 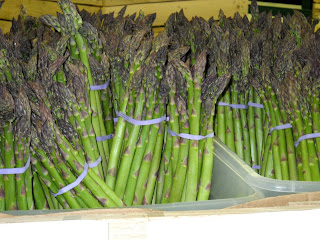 See it Framed
Posted by Jim Simms at 4:26 AM No comments:

It started out as a pretty day, not nearly the crowd I expected. Probably because they called for rain, 80% chance of thunderstorms. But what the heck, being from Kentucky it is against the law to miss opening day. So I joined a few thousand of my closest friends and we braved the elements. Sure enough a torrential down pour hit just in time for the fifth race.


But it was worth it, got up close and personal with Conveyance and American Lion, both contenders for the 2010 Derby. Conveyance took it all in: 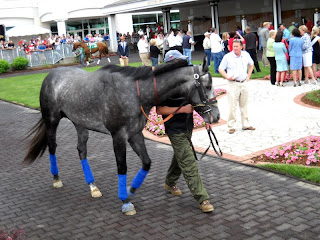 
American Lion looked like he was ready to run: 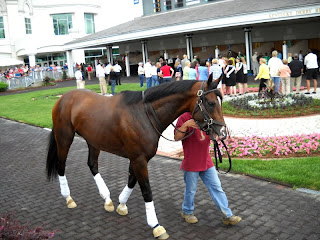 What a pretty horse!  The one below is Dublin Da'Bet.  He is in the first race of the Spring Meet, it will be his 6th career run, and his 3rd win. 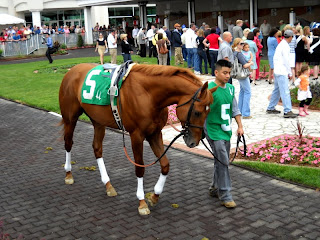 See it Framed
Time for the first race. 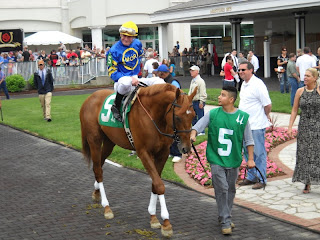 That is Calvin Borel atop Dublin Da’Bet, his first win of the day, he won 3 out of the first 6.  That is odd, it was Dublin's 3rd career win and his 6th career run, how strange.  I left after the sixth race because it was raining so hard couldn’t get good pictures.

This is Calvin after winning the first race. 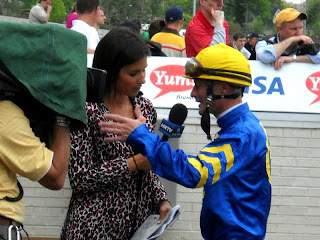 I'll be back later to add some more pictures.
Posted by Jim Simms at 3:02 PM 1 comment: 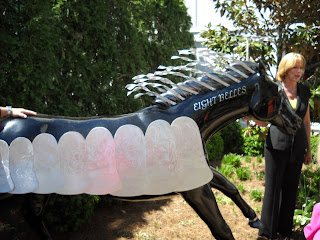 This weekend we are headed to opening day Spring Meet at Churchill on Saturday, and the Cherokee Art Fair on Sunday.  The private jets will start buzzing in next week from all over the world.  The balloon glow is going to be downtown this year, no idea who's bright idea that was but we are going to skip it.
Posted by Jim Simms at 7:52 PM No comments:

I attended the air show yesterday, can’t hardly walk today!  Parked south of Broadway and walked down to the river, I wasn't the only one that made the hike. 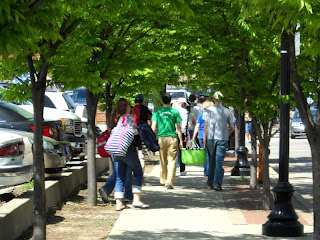 The journey continued until we reached River Road, you can't tell from this picture but the ramps to I64 were shut down and people were standing on them.  Later, during the fireworks the Kennedy Bridge will be closed shitting down I65 both directions. Ever seen a show shut down an interstate highway?  The picture below is underneath the Second Street Bridge, the oldest of the three downtown, not counting the old rail road bridges. 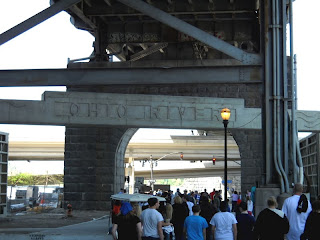 A few thousand of my closest friends.  Don't think you can see the other bank, it is also littered with peeps. 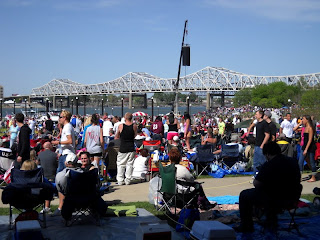 The air show was under way as I made it to the river.  The Missing Man formation was touching, they had a moment of silence for those who have made the ultimate sacrifice. 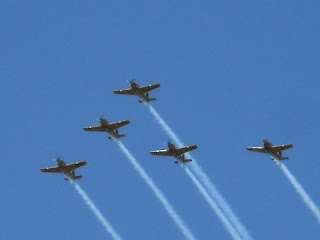 Skipped out before Thunder Over Louisville began, to many people.  The planes from the air show are still making a racket today. Tried to catch this puppy when it made a low pass on the river but couldn't catch him at 550 mph, Screaming Eagle is a misnomer, Roaring Eagle would better describe the noise.  I guess eagles do not roar... 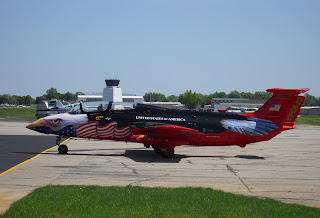 We are attending the grand re-opening of the Derby Museum this afternoon. Hope to bring back some shots from that.


Hope to have some of my paintings photographed soon. Please check back.
Posted by Jim Simms at 8:02 AM No comments:

My first art class was in 1969, well the first one I recall. I remember vividly because the teacher was so critical of my work. She praised the creativity but poo pooed the delivery. Years later I saw one of her pieces in an estate auction and bought it. It is hung on the wall right outside my bathroom! Since then have studied under many teachers using a variety of mediums, currently trying to master acrylics. Enjoy everything except working with pastels, for some reason they strain my eyes. They seem to vibrate after a few minutes of concentration.

Now, I spend hours at a time at the easel, it is almost like meditating. I remember the first time I sold a painting, it was exhilarating. The creative process has become so fascinating that simply completing a piece creates almost the same rush. There was a time when my veins were filled with ice water, the only thing that mattered was money and the stuff it would buy. No kidding, there must be alizarin crimson in there now. And just a speck or two on my hands, some blue on the walls, splotches of green on the floor and my feet, beware of the rooster tail of paint in my wake!